The national economy is made up of diverse regional, city and local economies. The human settlement system comprises many villages, towns, townships, suburbs and other urban communities. This does not correspond neatly with the geography of the national economy, for historic and contemporary reasons. In fact, a striking mismatch between the distribution of the population and economic opportunities threatens the viability of many communities and forces extensive migration and long-distance commuting.

A parallel set of research questions concerns the structure and dynamics of the macro-economy. One of the tensions requiring investigation is that which sits between macro-economic growth and redistribution. A ‘growth-first’ agenda means increasing confidence among domestic and foreign investors, lowering business costs, cutting red tape, reinstating fiscal and monetary disciplines, and rebuilding integrity in public institutions. But it will take time for the benefits to translate into more and better jobs, higher tax revenues, improved public services and higher social grants. Another tension to be explored is between macroeconomic management using orthodox policy instruments and structural transformation through more direct state intervention to diversify the skewed patterns of economic activity, ownership and control.

The HSRC has considerable expertise in spatial economic development (rural, urban and regional), human settlement formation and community dynamics. The key stakeholders include the national departments of Trade, Industry and Competition; Human Settlements; Agriculture, Land Reform and Rural Development; local government; and National Treasury, along with key provinces and metropolitan municipalities. Figure 10 outlines an important goal of this division. 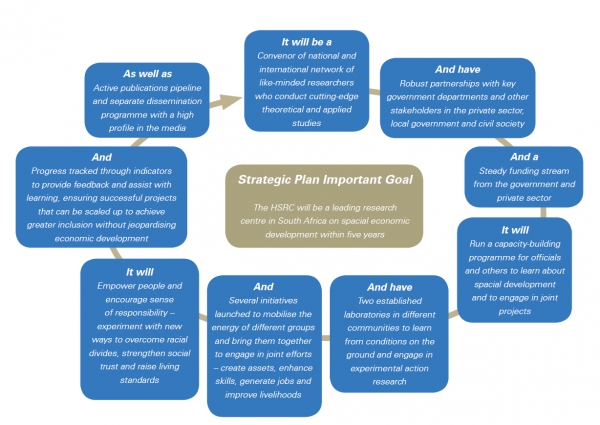 A significant goal in the Programmatic approach: National, regional and local economies (click on image for larger version).

The book focuses on micro-enterprises, the business strategies of township entrepreneurs and the impact of autonomous informal economic activities on urban life.